Burnout syndrome is real. In fact, the World Health Organization now recognizes it as an official medical diagnosis. It’s characterized as “resulting from chronic workplace stress that has not been successfully managed.”

Characteristics include feelings of energy depletion or exhaustion, increased mental distance from one’s job, or feelings of negativism or cynicism related to one’s job.

If it does, you're not alone. According to stress.org, between 75 percent and 90 percent of medical visits are stress-related and costing the U.S. approximately $600 billion annually.

“Stress is what happens in the gap between demand and capacity,” said Heidi Hanna, PhD, author of "Stressaholic: 5 Steps to Transform Your Relationship with Stress."

The key to managing stress is to get a clear picture of where it’s coming from and how you deal with it personally.

When I was a senior health producer at Fox News Channel in 2016, my appendix burst. This is a very dramatic way for your body to tell you to slow down and reprioritize. I was in the hospital for nine days and on sick leave from work for six weeks. Having an appendix rupture is like having a dirty bomb go off in your body. It’s very dangerous.

I needed to get back on track. After writing my first book, "Listful Thinking: Using Lists to be More Productive, Highly Successful and Less Stressed," the year before, I was doing too much. But when I landed in the hospital, I had no choice but to embrace a new mantra, “Rest is the New Hustle.”

I took everything off my plate. Every appointment, every project, everything. 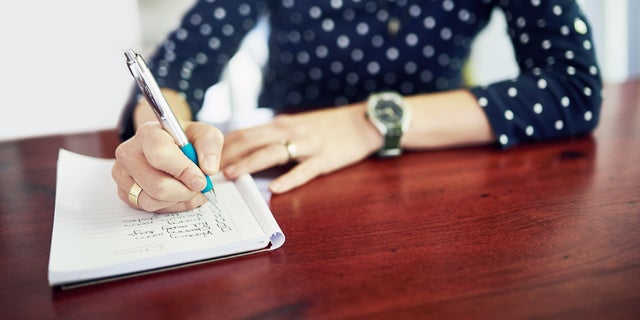 Sometimes just washing my hair was the one thing I did for the day. It gave me a new perspective into how much we put on our plates and what really matters most.

That’s why I wrote my latest book, "Listful Living: A List-Making Journey to a Less Stressed You." I wanted to design a life that was less stressful and the only way I knew how to tackle it was through list-making.

Here are three list-making techniques to live a life with less stress:

1. Create lists at the end of the day. List making can be the ultimate stress reliever if used correctly. I suggest writing to-do lists at night for the following work day. It was always the last task I did for the day when I worked at Fox News and I’ve continued doing this today as a media trainer and strategist.

Run through every single thing you have to do the following day and write it down. Make sure to put down every appointment, every email and every task you need to do. That way when you sit down at your desk in the morning you can hit the ground running and have an intention set for the day.

An advanced move is to put how long you think each task will take. That will help you get more done in a day and tap into your personal productivity style.

2. Be mindful of what you put on the list. Only include tasks that you have the time and the resources to do. This will make you take a long, hard look at what is actually getting on your list. With this rule, it’s important to recognize when you have to take something off your list. It allows you to prioritize better and create space in your day to actually get things done.

3. Be specific. This will make all the difference in taking something from a task on a list to an actionable item. Instead of writing “mall” on your list, write “buy gift for grandma.” This will solidify in your mind what needs to be done and help you to stay focused and avoid distractions. Plus using an action word will set you into motion to actually do the task.

For more ways to design your life for ease and less stress check out "Listful Living: A List-Making Journey to a Less Stressed You."

Paula Rizzo is an Emmy-Award winning producer and served as senior health producer at FoxNews.com for over a decade. She’s also a media trainer/strategist and frequent speaker. She’s the author of Listful Living: A List-Making Journey to a Less Stressed You and Listful Thinking: Using Lists to be More Productive, Highly Successful and Less Stressed. For more go to ListfulLiving.com and PaulaRizzo.com.