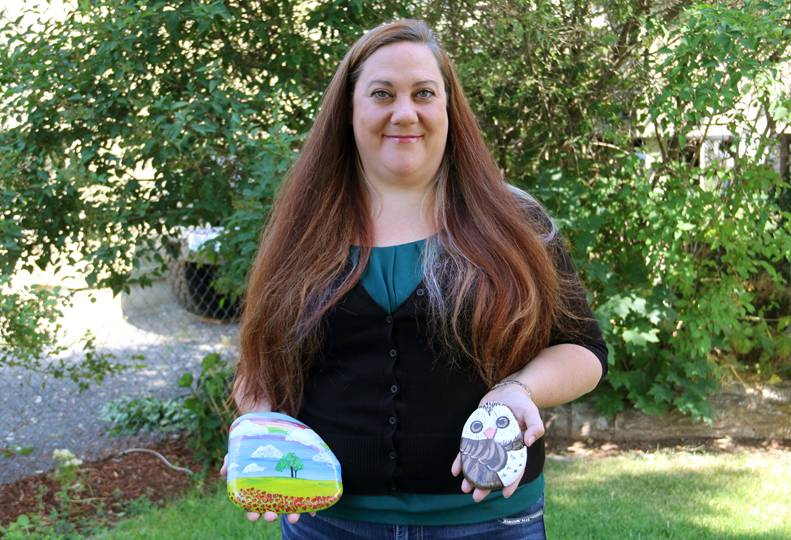 Tiffany Fry, founder of the Spokane-based nonproift Kindness for Cause, displays two “kindness rocks” she recently painted to brighten the day of whoever finds them.

Kindness for a Cause is a newly formed Spokane-based charity that seeks to cultivate kindness in the community by providing birthday and holiday events and donations for underprivileged children.

Kindness for a Cause organizes at least 24 birthday parties every year and five main holiday events for Thanksgiving, Christmas, Valentine’s Day, Halloween, and Easter.

Tiffany Frye, who founded the organization, says Kindness for a Cause also conducts at least one online giveaway contest each month, offering gift cards as prizes to participants.

“My favorite giveaway was actually the time we asked people to pledge volunteer hours to try to win different gift cards,” she says. “The person with the most volunteer hours would get that card after completing their hours.”

She says each party or event is planned and advertised one month in advance on the Kindness for a Cause Facebook page, where viewers can submit nominations of children they believe could benefit.

“At the end of the month, we (Frye and Kindness’s board members) collect nominations and then vote on the children we most want to win and chose two overall winners,” she says. “It can be hard to choose, and in really tough cases, we’ll sometimes agree to do an extra party. If there are only a small amount of nominations, we might also offer to combine the parties.”

All birthday kids chosen for a party get a present selected by Frye and a cake donated by Nothing Bundt Cakes, on the South Hill, she says.

“We reach out to parents to ask about each child’s interests so we can choose a present for them,” she says. “I keep a lot of different items on hand, but kids are so diverse in what they like that I often end up shopping for something in particular.”

Depending on the type of party or event being advertised, the organization sees anywhere from two to 30 nominations, Fry says.

“Some parties are really popular,” she says. “For our Easter basket and Christmas basket giveaways, we get hundreds of nominations.”

She says the organization’s Easter and Christmas events are also the most intensive to plan.

“Events are advertised for nominations on Facebook and participants are chosen the same way we do birthdays,” she says. “For Easter and Christmas, we also do about 50 basket giveaways, since we’re only able to accept a set number of kids at the party.”

Frye, who works full time as an intensive care nurse with Providence Holy Family Hospital, says she started Kindness for a Cause in January 2018.

“Starting my own charity was always in the back of my mind,” she says. “I did some fun Christmas giveaways for children in need in 2017, which was fun, but later I realized those same kids are still in need at other times of the year when people perhaps have less giving spirit.”

Frye says her mother, Maude Marvicsin, and her sister, Misty White, are members of the organization’s board, as are friends Dottie Stecker and Michaela Davis, who serve, respectively, as the charity’s treasurer and secretary.

So far, the charity is still a small organization, with no official offices. All of its work is managed online through Facebook and Instagram postings, she says.

Frye says the organization’s service area is the greater Spokane area, although it occasionally fulfills requests in North Idaho.

“Some of the stuff has to be delivered, so it just makes transportation and coordination easier to stay within the area,” she says.

Frye says Kindness for a Cause hosts many of its group holiday events at Family Promise of Spokane, and Transitions women and children’s center, both of which offer homeless shelters for children and their families.

Frye says she seeks volunteers for each party or event through Facebook or the Spokane Cares website, and she relies on family, friends, or coworkers to help out.

“We have some regular volunteers, but a lot of what we do is word-of-mouth,” she says. “Depending on the size of the event we need anywhere from 10 to 20 volunteers.”

Frye says she collects party items and birthday gifts at post-holiday clearance sales throughout the year and keeps them in a storage unit for later giveaways.

“I try to keep track of the items that are popular with kids right now, especially since those are things parents in tough situations can’t usually afford,” she says. “The goal is to allow these kids to experience things they wouldn’t otherwise be able to.”

Overall, Frye says the charity sees about $5,000 in donations each year from local sources and fundraising events, but both she and her mother still each put upwards of $10,000 toward the charity last year alone.

“I wish we could do more, but we’re really small and it’s hard to get funding,” she says. “I don’t have a lot of experience with grants and applications, but we do apply for some contests and keep our eye out for new opportunities.”

Frye says she currently funds about 80% of all the activities the charity works on herself, although she does reach out to area businesses to ask if they’re willing to sponsor events or donate materials.

“We’ve had some businesses like Laser Quest, Wild Walls, and Wish-Upon-A-Star donate toward events,” she says. “We also do some fundraiser events, as well as (accept) donations online through Facebook, PayPal, and our bank account at STCU.”

Frye says some parties the organizations hosts are sponsored or donated by volunteers or others who are familiar with the charity’s work.

Occasionally, Frye says Kindness for A Cause receives requests for items that are beyond its scope of giving.

“We do sometimes hear from people in need of things like food, clothing, or school supplies,” she says. “In those cases, we’re able to refer them to other charities in the area that do offer those things. I also try to keep our Facebook updated with events happening in the area that are free to participate, or where free items are being given out.”

Frye says she also gets some special requests from parents who are going through a rough patch and can’t afford a child’s birthday or holiday celebration.

“I do try to help those individuals when I can,” she says. “This last month, we had a request from a mother whose husband was in jail and her car had broken down, and we were able to give her a cake and a present for her son.”

In addition to events, Frye says the organization’s members also create and distribute painted rocks known as “Kindness Rocks” throughout the Spokane area.

The Kindness Rock Project was started in Cape Cod in 2015 by Megan Murphy, a woman who wrote inspirational messages on rocks and left them behind for people to find or collect. The project has since become a viral trend.

“We know it brings joy to people who find them,” Frye says. “It’s also a great way to advertise our charity and get more visitors for our page, because we put our name on the back of each one, and whoever finds it can post a picture online, and we’ll send them a prize.”

Looking ahead, Frye says the organization hopes to obtain more funding, so it’s able to do more birthday parties and events.

“One of our goals is to be able to do more than two birthday parties each month, and ideally some kind of group party for all of the kids who are nominated to attend,” she says.

Reporter LeAnn Bjerken covers health care at the Journal of Business. A Minnesota native and cat lover, she enjoys beachside vacations and writing poetry. LeAnn has worked for the Journal since 2015.