NY Spirit/ The Medicine of the Dark-Skinned Mother

In a world teetering on the brink of disaster, we are in desperate need for words of wisdom to guide us. Can the rich history and mythology of the Goddess/Divine Feminine help us make sense of what is happening?

A deeper understanding especially of dark-skinned Mother Goddesses across cultures can shed some light on the current situation. The Dark Mother is a powerful symbol and also serves as a major catalyst for the changes now underway which we may view as birth pangs preceding transformation.

What in the World is going on?

Our world is out of balance. We are faced with political power abuse, economic inequality, armed conflicts, environmental devastation, racism, sexual abuse, and unfortunately, the list continues. At the root of our problems lies the imbalance between masculine and feminine. Most of our institutions have, for a very long time, been shaped by the “unhealthy masculine” championing control, domination, competition, separation, and exploitation over values such as cooperation, partnership, inclusivity, peaceful resolution of conflict, and responsible stewardship of natural resources.

Without addressing the essential missing piece of the Divine Feminine/Goddess we cannot reach wholeness, individually or collectively. And we cannot come into balance with the Earth.
When I say “masculine” and “feminine,” I do not mean “men” and “women.” It is not about gender here but about certain qualities, energies, or patterns that are deeply entrenched in our psychological make-up. These patterns influence the way we think, speak, and act in a big way. Renowned Swiss psychologist Carl Gustav Jung called these (mostly unconscious and conditioned) patterns archetypes.The most common archetypes are the “Father,” the “Mother,” and the “Savior-Hero.” Some of these archetypes have been passed down to us primarily through organized religion.

In all likelihood, you too grew up with the image of God as an all-powerful archetypal “Sky-Father” high up in the heavens who would punish you if you didn’t follow “his” rules. Can you recall how this image made you feel as a child? Scared? Rebellious? Did this image empower you in any way – or rather the opposite? What if God was not a judgmental “Super-Someone” above and separated from you — but rather a God of infinite love? And what if God was every bit as much a Mother as a Father — and beyond? To address these questions, I turn to the word for God in the native language of Jesus Christ: In Aramaic, God was referred to as a “parent” – as both Father and Mother. However, as religions became increasingly dominated by men, the Mother aspect of God was ignored or got lost in translation.

In the Beginning Her Spirit Hovered over the Waters

In Genesis we read about the darkness before the act of creation when God’s Spirit hovered over the waters. This primordial darkness may be viewed as akin to “dark energy” — a term used by astronomers today for the mysterious seventy or so percent of our universe that remains practically unknown. This primordial darkness also relates to the symbolism of dark mother goddesses across cultures. Over the last few decades, light has been shed on how our prehistoric ancestors worshiped a great Mother Goddess viewed as the creative matrix of all life. At the dawn of religion, God was indeed a Woman. It was the Dark Mother whose Spirit hovered over the primeval waters and whose womb gave birth to solar flares, swirling planets, atoms, cells and all of life. The Mother is the ever-unfolding creative life force and the ecstatic dancer on the cremation grounds. She is the first and the last. She is the Paleolithic Mother carved at the entrance of rock shelters 25,000 years ago. She is the Neolithic Bird and Snake Goddess. In ancient Egypt, the great Goddess Isis — who also had a dark-skinned manifestation — was worshipped among others as the “Queen of Heaven” and “Savior of the Human Race”. And the Black Madonna, who shares some symbols and functions with these pre-Christian goddesses, has often been invoked for freedom struggles against oppressive governments across the world. The Dark Mother is indeed the ultimate “sacred activist” and change agent. 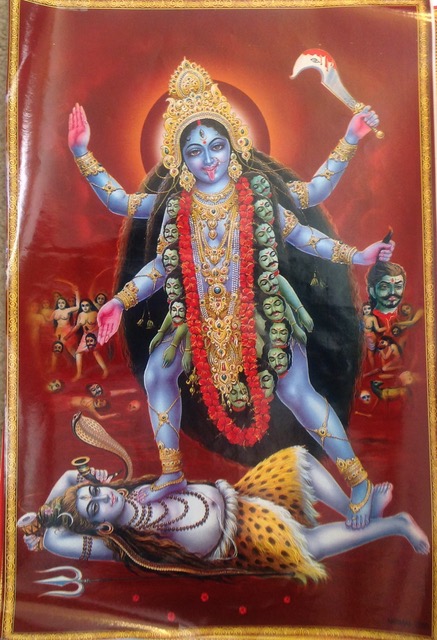 The Ecstatic Dancer of Life and Death

Let us now take a closer look at the goddess Kali, the Black Mother in India’s Shakta tradition. With her garland of severed heads, pendulous breasts, disheveled hair, sunken eyes, and lolling tongue hanging from her bloodstained mouth, she appears at first glance gruesome and even repellent to most Westerners. Kali is commonly depicted as standing on Lord Shiva’s corpse or dancing her frenzied dance in the midst of the burning pyres on the cremation grounds. Her multiple arms variously hold a bloody sword, a freshly severed head, and a skullcap filled with blood. What are we to make of Kali’s terrifying appearance?

Perhaps it is not surprising that even in our so-called progressive modern times comments can be found in cyberspace calling the Dark Goddess a “witch” or “demon.” Yet rarely do we ask the question: Why do dark-skinned goddesses stir up such strong emotions in us? And what is their deeper function and symbolism at this time of dramatic changes on our planet?

To get a deeper esoteric understanding of the Dark Mother, we need to go beyond her physical appearance. The severed heads symbolize our finite attachments, illusions, and our false self-identity that are being destroyed by Kali, if we invoke her. She turns everything we expect or take for granted upside down. And she shatters the old patriarchal paradigms that do not serve us any longer. Kali is an embodiment of divine love and wisdom. Her nakedness symbolizes her knowledge of the “naked” or Supreme Truth beyond the veils of delusion. In this function, the Dark Mother helps us to come to terms with our deeply entrenched fears — most prominently our fear of death. She calls on us to step outside our self-imposed “comfort zone” and face our own “darkness” — our unresolved psychological issues. The Dark Mother embraces all of our fears, heartbreaks, anger, and despair — nothing is excluded. Her medicine is “holy darkness.” It is in what the mystics call the Dark Night Journey of the soul that we grow, both psychologically and spiritually. Meister Eckhart, one of the great medieval Christian mystics, reminds us that the ground of the soul is dark. To come to terms with our own fears, we have to take the plunge into the darkness, the great Unknown, the scary place we would rather avoid. Yes, this process is painful. Yes, it is a crucible. Yet it is in darkness that we gain illumination and wisdom. Dark-skinned goddesses across cultures hence symbolize the mysteries of the night, death, and rebirth.

Befriending ‘Holy Darkness’ in the Cave of our Heart

Visualize yourself venturing into a dark cave, the womb of Mother Earth. You are alone. All external distractions have fallen away. You have to draw your attention into the core of your Being – the “cave of your heart.” Surrounded by an impenetrable darkness you cannot even see where your next step may take you. What comes up for you? Fear? Despair? Helplessness? Sit with these strong emotions for some time and be open to whatever arises. The way out of the cave is through trust. You have to trust that you will be guided step by step. Paradoxically, it is by facing our deepest fears that we free ourselves from our nightmares. And it is by surrendering to what we cannot know that we become whole human beings.

In challenging times like these, we urgently need the strong presence and wise guidance of the Great Mother who lovingly holds us through these dark nights of our collective soul. The Mother reminds us that a brighter future is indeed possible — even now. She asks us to “be the change” and to speak truth to power in alignment with our highest values. Without addressing the essential missing piece of the Divine Feminine/Goddess we cannot reach wholeness, individually or collectively. And we cannot come into balance with the Earth. Without the Goddess to give birth to a new world, we have no future. Let us remember that the story of the Goddess is our story – it is a story of love and healing, birth and death, renewal and evolutionary change. NY Spirit/ The Medicine of the Dark-Skinned Mother