According to Monk Yun Rou–Yale educated, South-Florida based author of 15 books, Tai Chi Master and Daoist monk ordained in China–if we adhered to the principles set forth around 500 BC by Lao Tzu in the Tao Te Ching, we wouldn’t be in this mess–but there is just enough time to commit to the Daoist (Taoist) way if our world is to avert “The Sixth Great Extinction.”

You would think that a monk would avoid the limelight and controversy, but not this one! He weighs right in on the great issues of today and how we humans are undermining our existence, not just environmentally, but by creating a toxic focus on self-interest that poisons our politics, lifestyle, health, parenting, technology, human interaction, and much more.

But lest you think his new book, Mad Monk Manifesto is simply a diatribe or rant, it is not! From its subtitle: A Prescription for Evolution, Revolution and Global Awakening you will discern that he has answers. This beautifully penned guidebook, from the award-winning author who has written for The Huffington Post, Vogue, Vanity Fair, Parade, Newsweek, The Wall Street Journal, WebMD and Fox Business News, reveals all the ways we as individuals, our society and our institutions can adapt and apply Daoist wisdom and practices to life today.

Using those basic principles–take your cues from and exist in harmony with nature, live simply, be authentic and humble, serve others, do no harm, stay calm and creative in the face of resistance, honor your own body, live peacefully-he lays out how things could be different if the Daoist filter was applied to just about everything.

“Relaxing and Rectifying,” “Rebalancing Daily Life”,”Fostering Community and Deepening Culture” – it is all about how we treat each other. Next, Monk Yun Rou tackles “Culture, Commerce, Government and Power” and “Sensitivity and the Environment,” closing with his plea for “Awakening to Spirit and Service.”

Monk Yun Rou is committed to sharing the values and practices of Daoism, of which Tai Chi is the most visible physical form. He may best be known for Longevity Tai Chi with Arthur Rosenfeld on national PBS television that aired in 60 million households from 2010-13, but Mad Monk Manifesto will undoubtedly bring him back to center stage.

Filled with iconic stories taken from ancient Chinese writings, his own experiences and astute observations, the Mad Monk Manifesto will spur conversation and open new awareness…hopefully before it’s too late. To book Monk Yun Rou for a compelling interview, please send an email with the name of the show, your contact information, a proposed date and time, and the calling details

Yun Rou (the name means Soft Cloud) has been called the new Alan Watts. Born Arthur Rosenfeld in New York City, he received his academic background at Yale, Cornell, and the University of California, and was ordained a Daoist monk in Guangzhou, China in 2012. Host of the hit National Public Television show “Longevity Tai Chi”, he is the author more than 15 books, including award-winning novels optioned for film in Hollywood and Asia. In recent years his non-fiction books offer Daoist prescriptions for the challenges of culture, society, and everyday living, while his novels bring a New York literary sensibility to the emerging “Silkpunk” genre, blending Chinese history, science fiction, and fantasy into rollicking, thought-provoking reads. His articles have appeared in Vogue, Vanity Fair, Parade, Newsweek, The Wall Street Journal, WebMD, Fox Business News, and numerous other websites and newspapers.

Monk Yun Rou began his formal martial arts training in 1980 and has studied with some of China’s top tai chi grandmasters. In 2011 he was named Tai Chi Master of The Year at the World Congress on Qigong and Traditional Chinese Medicine.

The Action on Film Festival recently chose him for their Maverick Award (previous recipients include David Carradine, John Savage, and Talia Shire) and established an award for writing excellence in his name. In July 2014, Yunrou was the opening and closing keynote speaker at the International Tai Chi Symposium in Louisville, Kentucky. In 2016, the American Heart Association profiled Yunrou as an inspirational resource.

The Florida Sun-Sentinel called Yun Rou’s novel A Cure for Gravity one of the 10 best books of the year 2000. His bestseller The Truth About Chronic Pain (New York: Basic Books, 2003) was a finalist for the prestigious Books for a Better Life award for his bestseller, his title Tai Chi – The Perfect Exercise (Da Capo Press, June 2013) is widely regarded as a standard work in the field. Mad Monk Manifesto is his first book with Mango Publishing, but will not be his last. Yunrou writes, teaches and speaks in South Florida and around the world. 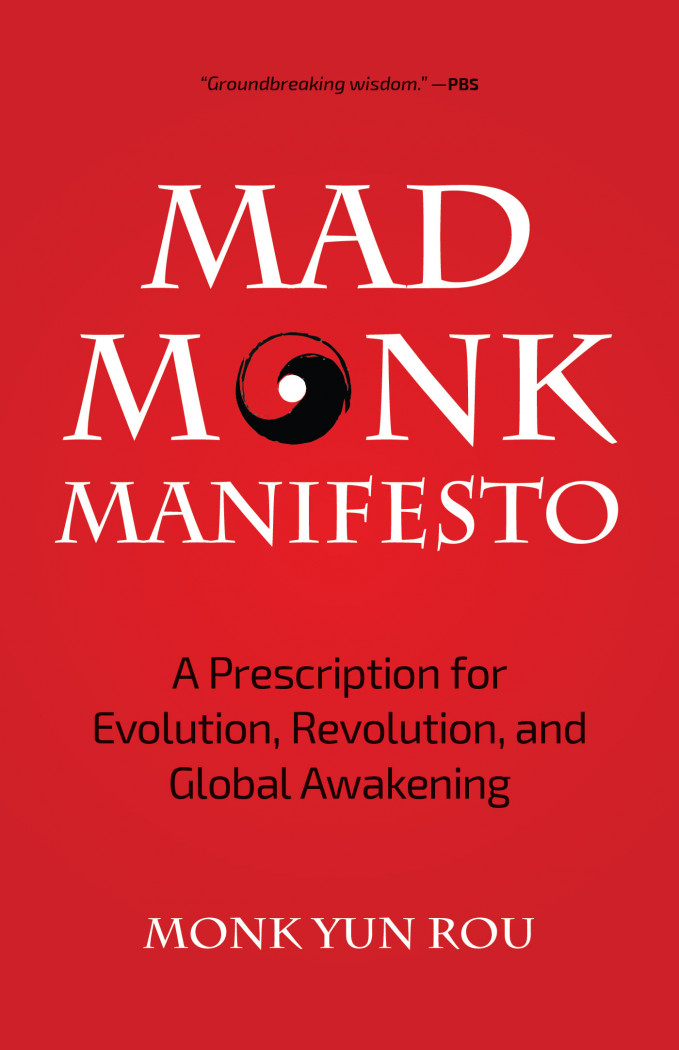