Most people aren’t aware of whatever loosely assembled accounts would constitute “Film Twitter,” but on Friday at the Horton Theater, Alicia Malone —host for Fandango and Filmstruck—drew a line between the feverish fandom of Comic-Con and the relatively unknown social media subsect.

“That’s how I feel about social media—we can connect with people and there are little groups within the wider banner of Twitter,” she said. “There are groups like Film Twitter…and Film Twitter is not a group per se, it’s just kind of a collective word for people who talk about film online and on Twitter—lots of hot takes happening, lots of great articles being shared.” Malone, who has over 50K followers, is one of the figureheads of Film Twitter, mostly led by critics, authors and a few industry folks.

Which of course means that “it can be a pretty male-dominated space,” Malone said, “so today we’re celebrating some of the great women who speak out and use the platform to talk about issues and to come together with other women.” 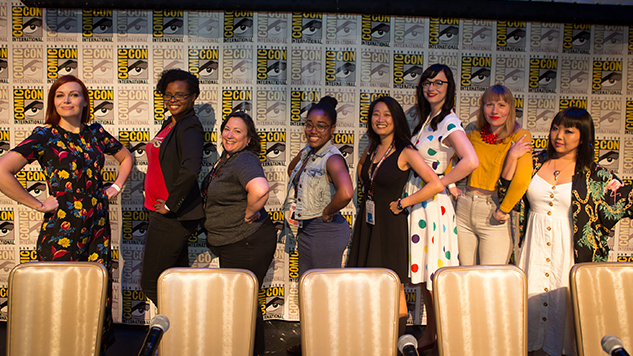 Aisha Harris, a culture writer and editor at Slate, contextualized Twitter as a means of amplifying other voices. “I as a black woman often want to champion other black women who are filmmakers,” she began. “That’s a thing I focus on—but really anyone who’s not a straight white guy. No offense to the straight white guys, but some offense, that’s fine.” It’s OK, we have it coming.

She added, “I’m trying to be better even at not just focusing on race and gender and sexuality, but also expanding into disability and all these things that are underrepresented on screen.”

Jacqueline Coley, contributor at Black Girl Nerds and Rotten Tomatoes, took Harris’s comment further, injecting an overt sense of culpability. “There are moments where you are going to say something that you didn’t realize, when you put it into perspective of a minority or an unrepresented group,” she said. “It’s OK to say, ‘I didn’t know, I’m sorry, why don’t you explain and teach me so that I can exist in the world in a place where I don’t offend people and more importantly champion those that don’t have a large voice?’”

Which may seem antithetical to the typical tenor on Twitter: defensiveness and authority at all costs. Melissa Silverstein —founder of Women and Hollywood—brought Twitter, and most social media platforms, back to the beginning.

“I feel that social media has a power to connect with other people who might not otherwise be thinking of certain things,” she said, alluding to #OscarsSoWhite but making sure to remind the audience of the reality of most social media communities: “I feel like we all talk in silos too, so we have to figure out how to get outside our silos.”

She continued, “Personally, I don’t want necessarily to talk to lots of people outside my silo, because it sometimes is really negative…you gotta have a really, really thick skin.”

Editor-in-Chief at Nerdist, Rachel Heine, admitted that it can be difficult to not take things personally: “Well I have a very thin skin…there’s only so much you can take in without it hurting you.”

And yet, at the heart of most tweets is often a compulsion to assert oneself. “I suppose I call out things that I feel personally motivated to point out,” said Jen Yamato, film reproter at The LA Times, “if I feel like the voice of reason…or the voice of the underrepresented perspective that is not being represented in the conversation that I see is going on.”

“I think it’s also become very important to acknowledge…the importance of knowing when your voice is maybe not the voice of the experience that deserves or needs to be heard,” she went on, echoing Harris’s comments, “and to amplify the voices of others is just as valuable as shouting your own passionate arguments out into the ether.”

Ideally, Film Twitter provides burgeoning writers, or people who otherwise feel left out of cinematic conversations, access to mentorship and community. “This panel alone is a really good example,” Yamato pointed out. “There are a lot of wonderful women, a lot of other writers of different backgrounds, who I’ve only discovered because of Twitter.”

Angie Han, movies journalist at Mashable, agreed. “Being on Twitter,” she said, “I follow a lot of women and I try to interact with a lot of women, and just that by itself is really encouraging. It makes you feel like you have people with you.”

Chief Film Critic at MTV and host of The Canon podcast, Amy Nicholson led the panel’s discussion on the nature of reviews, and the inherent benefit of criticism towards representation. “It’s weird, I kind of like reading reviews from people who think very differently from me, or make me mad, and they might even say things I don’t agree with,” she explained, “but I like the idea of every strange voice contributing to this loud conversation.”

Nicholson’s words cut to the marrow of what criticism, and by extension, Twitter, can provide: empathy. “I feel like if people didn’t write reviews that you sometimes disagree with then you wouldn’t know what’s in different people’s heads,” she said, “and to me writing reviews is almost one of the most personal ways I think a person can express themselves.”

Reviews, in fact, do matter. Han drew a clear line between a film review and box office receipts, which then determines, very directly, how a studio will funnel finances in the future: “There’s like this feedback loop of white men critics reviewing movies about other white men, and that’s where the myth that only these movies can make money comes from.”

She joked, though she wasn’t really joking, “Any time there’s a movie that’s centered around women or black people, all the trades are like, ‘Holy Crap, we didn’t know that these people go to see movies!’ [These movies] always over-perform. And then that in turn affects what kinds of movies get made.”

Heine followed Han’s comments, “And I believe that reviewers matter: Who is reviewing, who is watching a film, who is bringing what background and life experience and understanding and cultural context to a piece of art will dictate then how they recommend that or perceive it or interpret it.”

“People are asking reviewers to check their privilege,” Silverstein summed up the current guard of online culture writers, “to really understand what their words mean in a way that hasn’t happened before.”

“I’d ask,” Heine then asked of us, “how many women, how many critics of color are staffed at any of the trades, any of the major newspapers?”

Silverstein re-oriented the conversation back toward the leadership of these publications. “Hollywood is a microcosm of our world. So women don’t put themselves out there in the same way men do,” she said, implying that it’s the responsibility of editors, who are often white men, to seek out underrepresented voices. “If you have 40 guys who say, ‘I’m a reviewer, I should be on Rotten Tomatoes,’ and three women, you’ve got to find those women.”

“It’s incumbent upon the people in leadership positions in the entire industry to bring in more diverse voices,” she emphasized.

Yamato responded apprehensively, “I don’t know that I necessarily advocate affirmative action in criticism. I don’t think any of us got here because of those identifiers.” Instead, she suggested casting a “wider net” to find writers that are both skilled and diverse.

“That doesn’t sound like affirmative action,” Harris replied, “just be more considerate. Think outside of the people who are just pitching to you instead of just going to them. Be looking for those voices.”

“I definitely think that Film Twitter in the last 5-10 years is the birthplace of the next generation of writers and thinkers,” Yamato said. “There’s this phrase that’s wonderful and succinct: If you see it you can be it, and the opposite is true.”

Yamato nodded, “When I grew up, I never saw another Asian American woman doing what I do, writing about the things I write about, so it never occurred to me to pursue it as a goal.” Film Twitter can be that starting point, an example of what could be. “You imagine what the current generation of young girls can see—they’ll have a little bit more of a sense of a seed of what’s possible.”

Still, Nicholson questioned if editors and leaders at publications have the best interests of their writers in mind when so much of the industry is blindly fueled by clicks. “I wonder if editors are maybe hanging writers out to dry a little bit because the controversy gets them hits as well,” she mused. “I’m nervous about that for criticism.”

Regardless, Coley said, it has to start with personal responsibility, with owning that Twitter handle. “Don’t just go into the vacuum if you get called out,” she said.

“If you have a publication and they get lit up because maybe they had something go through the editorial process and it was questionable,” Coley described, subtweeting any number of outlets she probably mostly respects, “and they just don’t say anything? They go crickets? That’s the worst.”

Why? “Because it’s basically saying: Not only do you not care about the people who you offended, but you don’t even want to engage enough to, even if it’s not apologize, at least comment on your whys, or your justification.”

She steered the conversation back towards helping writers who are just starting out, especially women, writers of color and writers from any underrepresented group. “Jessica Williams had a great quote about this,” she said. “She wanted to exist with the arrogance of a mediocre white male.”

Coley continued, “I second-guess myself in every room I’ve ever gotten into, and it’s not necessarily because I don’t think I’m valuable, but I think it’s because we were raised to a certain extent to be that way.”

Truly amplifying the voices of others is about finding that balance—between caution and confidence, between empathy and ego. Coley concluded, “That’s my biggest advice to everyone now: Work with that arrogance.”

Dom Sinacola is Associate Movies Editor at Paste and a very small part of Film Twitter.