With hundreds of self-help books lining the shelves of local bookstores, and hundreds of thousands more online, finding the one that’s right for you can be a daunting task. You could try each one to see what works, or you can simply read one book written by someone who spent the better part of a decade trying every “fix” from the SIBO diet to the Artist’s Way to the KonMari Method. Written by celebrity ghostwriter and New York Post columnist Stephanie Krikorian, Zen Bender: A Decade-Long Enthusiastic Quest to Fix Everything (That Was Never Broken) is a hilarious, relatable “anti-self-help” book that turns the new age wellness industry on its head as its author learns to bet on herself.

After losing her job as a TV news producer during the 2008 recession, Krikorian found a career in celebrity ghostwriting. For each self-help book project she took, she’d do extensive research on the topic and begin living whatever lifestyle she was writing about, much like a method actor, repeating the process with each new assignment. After a while, she wasn’t reading just for work—she was hooked. “I started reading more, because I found them helpful,” she says. “Then I started seeking out experts, coaches, gurus, healers and all kinds of things for a couple of reasons, but it started as an occupational hazard.”

What came next was a decade-long Zen bender filled with numerologists, reiki healers, astrologists, dating coaches and fad diets. “For me, it was this idea that, like a bag of chips sitting in front of me, if it’s there, I should consume it,” she explains. “Because there must be something broken in my mind, my soul, my body, all of that, or else why would all this stuff be out there to fix it if it wasn’t important?”

It wasn’t until a healer recommended a book that left her screaming, “This is ridiculous!” that she began to realize, maybe she didn’t need fixing after all. “When you get shaken, everything moves, and it’s hard to see what’s really wrong, and you start grasping at all these opportunities to fix it,” Krikorian says, looking back on her self-help circuit. A dating seminar she attended later, which told her she needed to keep her hair long and shiny so men would think she’s fertile, undoubtedly confirmed her epiphany.

Krikorian explains that writing Zen Bender, her first-ever solo book, was a very different process from her ghostwriting projects. “There’s less personal stake in the game when you’re writing someone else’s book,” she says. “They’re in tears sometimes, and I’m always looking at it in a very objective way.” Though she admits to stressing out over her own work due to numerous revisions and an unfortunately timed kitchen remodel running concurrently. “This book about letting go became an exercise in letting go, because I had all of this construction going on and I’m freaking out. Everything that could’ve gone wrong in the writing process that I had witnessed writing other people’s books, went wrong.”

If she hadn’t moved to the Hamptons, Krikorian isn’t certain the book would’ve been written at all. Having rented in Springs before, she decided to buy the house across the street after selling her grand New York City apartment. “It was never the plan to do the full time thing, and it ended up being the prescription that I had been chasing all along. I just didn’t know it until it happened,” she says. “It was peace that I really wanted and the Hamptons provides peace in many ways.”

While Krikorian describes Zen Bender as witty anti-self-help, she doesn’t wish to “slaughter all the sacred cows,” instead opting to take away one lesson from each book and teaching she tried out, in an effort to find her balance and avoid ceding power to any one ideology. “It’s meant to be humor, but there is takeaway,” she says. “I learned to bet on me.” 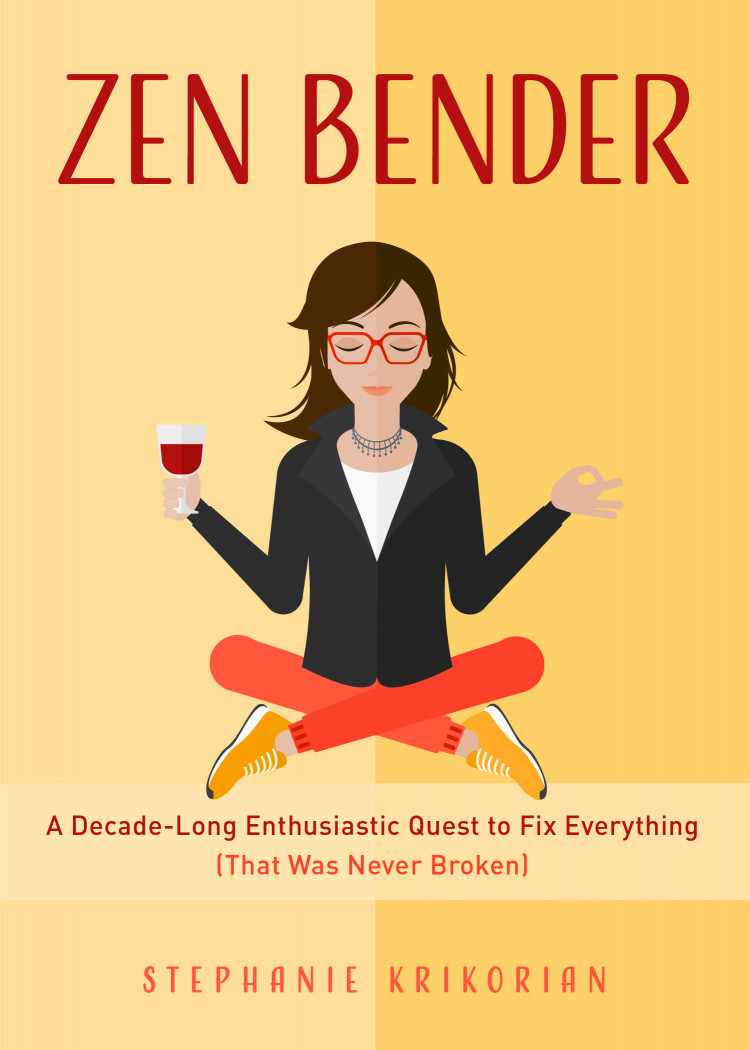