Editor’s Note: The American Kennel Club has had a long history of inclusion across our sport for exhibitors and spectators from all walks of life. This month, it is with honor that we support the LGBTQ community by adding the rainbow to our logo in honor of Pride month and the humanity it stands for. Additionally, we are sharing stories and voices of LGBTQ community members. Here is Sassafras Lowrey’s:

When the AKC went public on social media with a rainbow version of the logo for pride month, offline there was a flutter of LGBTQ dog people rapidly texting and private messaging each other, saving the image from the website just in case it disappeared.

Seeing the AKC so publicly support LGBTQ people involved in dog sports — and not only make that statement but defend it again and again and again in the social media comments section — was validating and healing. In ways. it felt like a representation of the full circle of healing I experienced as an LGBTQ person in the dog world.

As a high school student, I competed in agility with my Miniature Schnauzer and later my Shetland Sheepdog. I grew up in an extremely abusive home, and dogs were not only my passion, but my escape. When I was working with dogs, I forgot about everything bad that was happening. Dogs gave me a purpose, and as my bedroom walls filled with ribbons won at trials they symbolized so much more than Qs and titles. They represented a world of friends and connections that I was building for myself (and my dogs) amongst people who shared the same values and passions I did for dogs.

Dog people were the first people to get me to open up about what was happening at home when they noticed and asked about my bruises. No teacher or guidance counselor at school had ever cared as much about my situation as the women I walked courses with and crated next to at dog shows.

After an agility trial the first week of my senior year in high school, we went to sheriff’s station and I pressed assault charges against my mother (she would later plead guilty). Afterward, my dogs and I went to live with my agility coach. I had escaped the abuse of my childhood home, I had my dogs, and I was going to build a new life for us. There was only one problem: I knew I was gay.

The first night I stayed with my trainer after leaving the sheriff’s station, she asked me if I was “over that gay thing.” I promised her that I was. 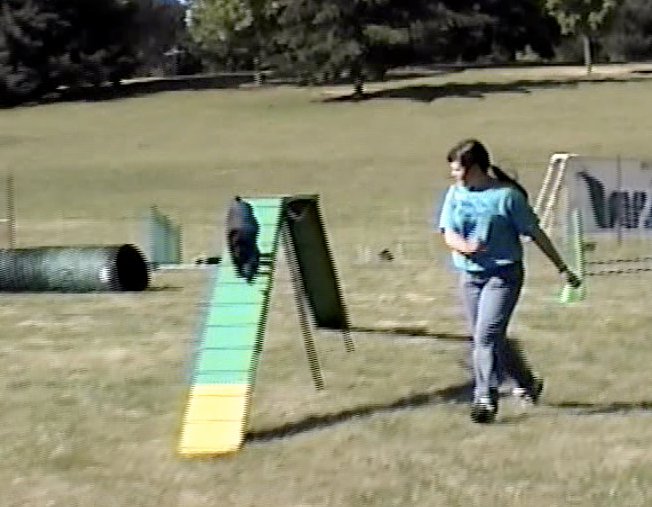 I didn’t know any out gay people in dog shows. There were many I thought might be gay. For example, there were two women who lived together and owned a training business together. There were rumors, but they insisted they were just friends. Because I didn’t know anyone else who was out, I tried to stay closeted. One weekend, I was camping at an agility trial out of state with my trainer and she told me that she had read my journal. That meant she knew I was (still) gay.

The Monday after that agility trial, my trainer called my school and had me paged to the office. She told me never to come home, and that I had 24 hours to figure out what to do with my dogs. I tried to call my dog world friends: the people I spent every weekend traveling with and training with. None of them would call me back. This was the early 2000s in a conservative area. No one wanted to be associated with “the gay person.”

Eventually, I was able to stay with a friend from school, but I was effectively homeless. I was seventeen and I didn’t have a job (outside of being an assistant trainer for the woman who kicked me out). I didn’t drive. I didn’t know where I was going to live or how I was going to finish high school.

A family member from whom I was semi-estranged took my Schnauzer, forcing his agility retirement. My trainer had me get a ride to her house and sign over the AKC registration of my Sheltie to her. The needs of my dogs were my number one priority. At that point, I didn’t care if I lived or died, I just wanted my dogs to have a good life. To me, that was the ethics of being a dog person of good sportsmanship.

Finding My Way Back to the Dog World

Years later, living in New York City, things began to change. I met one, then two, then three agility and obedience competitors who were also LGBTQ-identified. I started volunteering as an assistant dog trainer for an openly lesbian trainer and began training my own dogs in agility, Rally, and scent work. My dogs and I started competing in AKC Trick Dog and I became a Certified Trick Dog Instructor – mostly so I could support other LGBTQ people in the sport.

It has been 17 years since I lost my first dogs.

Even though the dog community originally failed me when I needed it most, I couldn’t stay away forever. It was the dogs who brought me back, and the unique connection that comes through sports training. This year, I entered a dog show as a competitor for the first time in 17 years. My young Newfoundland didn’t Q in the Rally ring — actually, she rolled on the mats where the dog before us peed! — but I wasn’t there for the ribbons. I was there to prove something to myself. That I belonged.

I didn’t have a panic attack in the ring, either. As I walked into the show with my dog and my partner — as out and visible queer people — some small, still-wounded part of me healed. 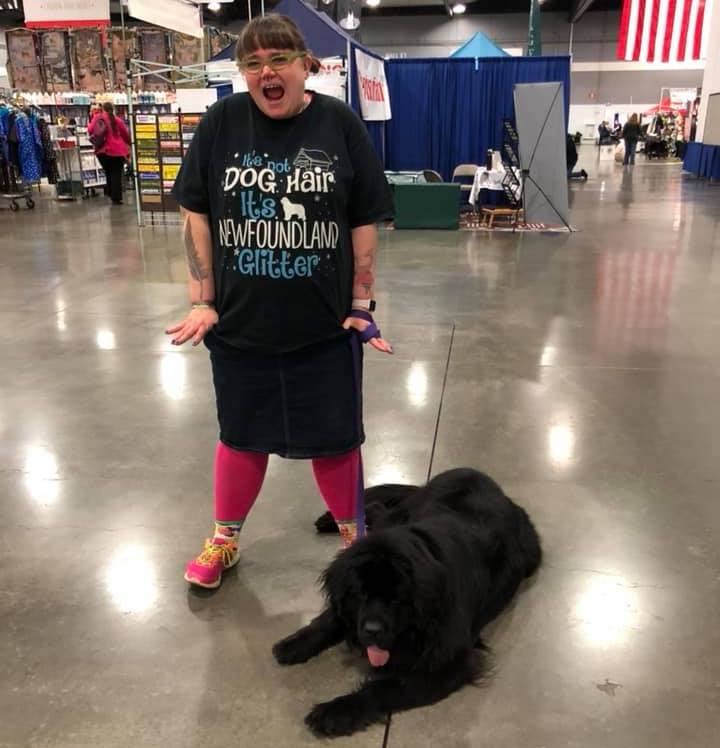 Sassafras, now in her 30s, and her Newfoundland, Sirius, compete in Rally in 2019.

I often talk with other LGBTQ people in dog sports and sadly, some of them are still afraid to come out – even in 2019. They call their partner a “roommate” or drive separate cars to trials, so you won’t realize they are a couple. LGBTQ people still worry that if they come out to people (the same people they see weekend after weekend) they will stop being their friends, won’t sell them puppies, or won’t continue to train with them.

Times are changing, and I have been thrilled to see conversations from dog people saying they will refer back the AKC rainbow logo social media posts in the future. Homophobia and transphobia have no place in the dog world, and I’m grateful the AKC is taking such a public stance about the importance of inclusion and diversity.

For me, returning to dog sports means bringing my full self, and a personal commitment to having (sometimes difficult or awkward) conversations with other dog people about diversity, inclusion, and LGBTQ rights. I do this not only because I refuse to ever be closeted again, but also in memory of who I was as a teenager and how isolated I felt. I want today’sjunior handlers (and adult competitors) to see out and proud LGBTQ people in hopes that they don’t ever feel pressured to hide or think they have to leave the dog world to live authentically. 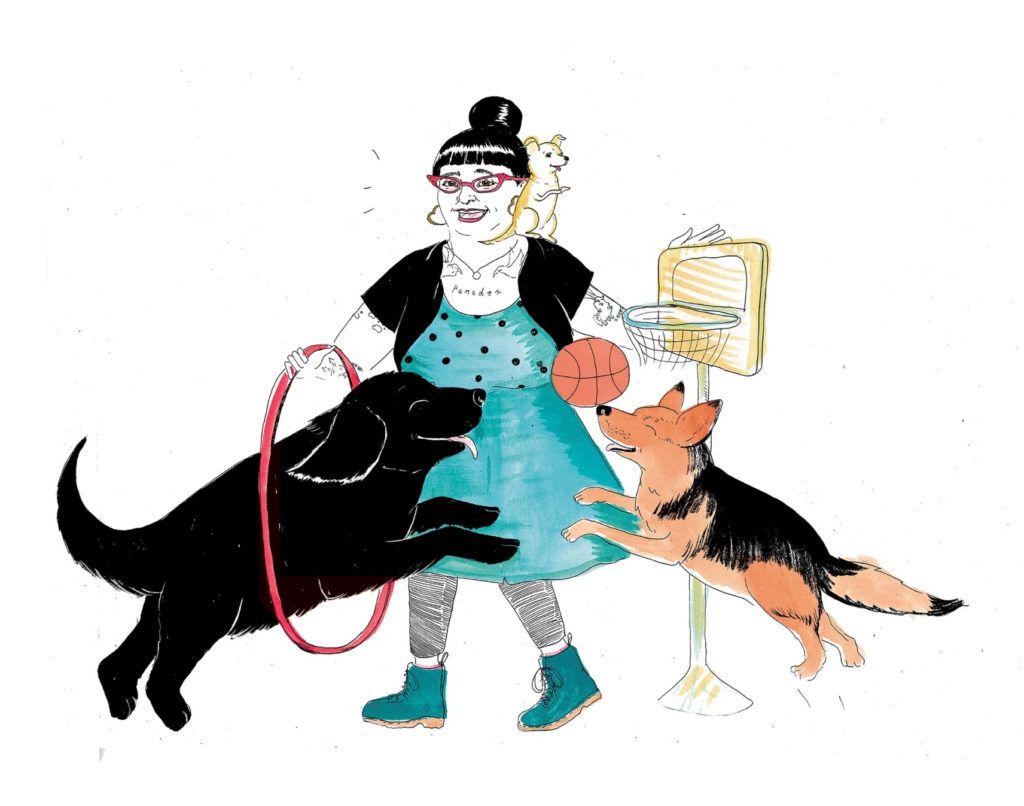 Sassafras Lowrey is an award-winning author and Certified Trick Dog Instructor. Sassafras’ books have been honored by organizations ranging from the American Library Association to the Lambda Literary Foundation. New dog books from Sassafras in 2019 include: Healing/Heeling, Bedtime Stories for Rescue Dogs: William To The Rescue (with Lili Chin), and TRICKS IN THE CITY: For Daring Dogs and the Humans That Love Them (forthcoming in August from Mango Press). Learn more at www.SassafrasLowrey.com.

Last month, she released “Healing/Heeling” a hybrid collection of lyric essays chronicling her life in dogs from belonging through loss, and ultimately her return to the world of dog sports as an out-LGBTQ person.`